​Scotland and England and Wales have the highest imprisonment rates in western Europe
Nearly 59,000 people sent to prison to serve a sentence in 2018, 69% non-violent
Nearly half of adults (48%) are reconvicted of another offence within one year of release
Prisoners and staff are less safe than they have been at any point since records began, with more self-harm and assaults than ever before. Despite a brief decline, the number of self-inflicted deaths is rising once again.
317 died in Prison year to Mar 2019 a quarter self-inflicted
Assaults on staff have more than tripled in only five years to 10,213 in 2018
The average annual overall cost of a prison place in England and Wales is now £40,843
The number of Muslim prisoners has more than doubled over the past 16 years
Only one per cent of Muslims in prison are currently there for terrorism-related offences
A third of people (34%) assessed in prison in 2017–18 reported that they had a learning disability or difficulty
Most women entering prison under sentence (82%) have committed a non-violent offence
Rates of self-harm amongst women are at the highest level for eight years 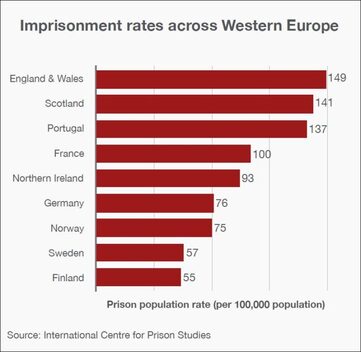